The Moth Problem In Sydney

What’s this current moth problem that everyone is complaining about in Sydney?

Each year around spring time, Sydney is bombarded by moths.

So what are these moths? Why does it happen? Do you need a pest control service for this?

They are bogong moths, which are migrating from the low land breeding grounds to the high country in SE Australia, where they stay for the summer

Each year as they have done for thousands of years when the temperatures start to warm up, bogong moths (Agrotis infusa) begin to escape the harsh summer and winter breeding grounds of the Darling Downs in QLD, western slopes and plains in NSW and drier inland regions of Victoria to the high country of the Snowy Mountains in southern New South Wales and the Victorian Alps.

Then in Autumn they make a return journey.

Bogong moths tend to fly at night and are attracted to lights. In the daytime, they tend to hide in dark crevices.

As they are migrating, you can well imagine how bright Sydney city lights can be. Winds can also play a major role in their annual migration and where they end up

There have been a large number of incidents where bogong moths have cause a major inconvenience to humans.

So What Can Be Done To Alleviate The Pest Issue?

This only occurs for a short time in Sydney (normally 1-3 weeks) and really there is not much that can be done apart from preventative measures in stopping them entering the premises.

If you live in a high rise building with plenty of windows:

A light spray of fly spray normally will fix the issue

We normally do not recommend a pest control treatment for bogong moths unless they are in huge proportions.

Bogong moths are brown in colour with a wing span of approximately 4cm. They belong to the family Noctuidae.

While bogongs do occur throughout non-tropical Australia, they only appear to migrate in the southeast.

The wing pattern easily distinguishes the bogong moth from other closely related species.

Their brown colouring provides camouflage while they are resting in the caves.

Adult bogongs tend to feed on nectar and, during migration, are often seen feeding at dusk on flowers such as grevilleas.

They equip for summer by storing fat reserves (up to 60% of their bodyweight).

The food they eat when they return from the mountains allows them to mate and reproduce.

If nectar is not available they are incapable to reproduce.

In a good year a female lays up to 2000 eggs and the larvae grow slowly over winter.

Known as cutworms, because they cut plants off at ground level, they can be minor pests for crops.

In late winter the larvae pupate in the ground. 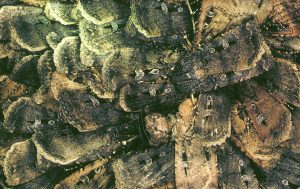