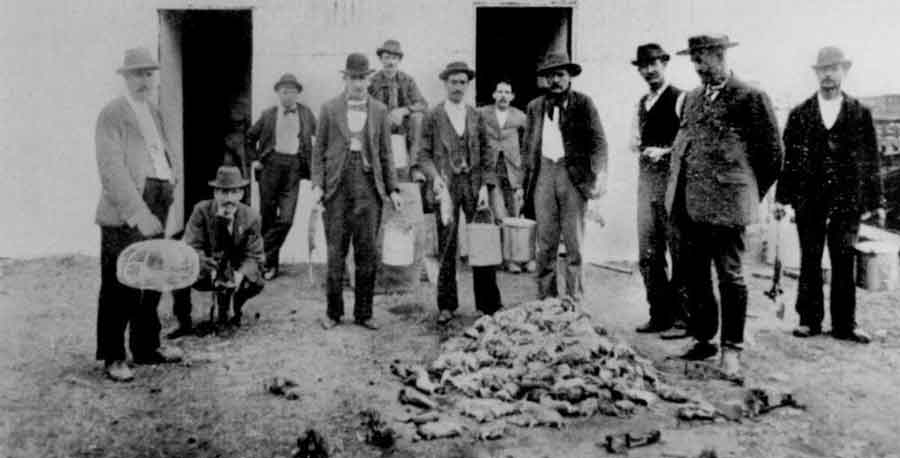 The Bubonic Plague, also known as the Black Death arrived in Sydney during the early 1900’s. The plague was transmitted by fleas that were carried on rats. People were becoming infected by being bitten by fleas

The first victim to die from the Bubonic Plague was Arthur Paine who died on the 19th January. Arthur was a delivery man who due to his work frequented the Central wharf. During 1900 and 1925 there were 12 major plague outbreaks in Australia, with Sydney being victim to the majority of deaths.

Within only an 8 month time frame it was estimated that there were  303 cases were reported and 103 people were dead in Sydney!

The plague however was not something that was just confined to Australia, it was the most devastating worldwide pandemic in human history.

As the people were aware that the plague was spread by flea infested rats, men were hired to exterminate the rats, for each rodent that was killed a sum close to $4 our days was given for each rat that was captured and burnt.  The capture and incineration was part of the cleansing process which did not only include catching rats, but it also meant houses needed to be destroyed, streets and wharf’s were washed down. Some official figures show that an estimate 44,000 rats were killed and incinerated!

I have included some pictures from the NSW record gallery, so our readers can really grasp an insight into what times were like during the Bubonic plague, right here in Australia.

These days the black death or Bubonic plague is not something we really hear much about, however in July this year *yes you read that right July twenty twelve an American man was bitten by a mouse, who mind you was trying to save the mouse from a cat, and he ended up contracting the Bubonic plague. This is only ONE reason why it is important that if you have a rat or mouse infestation in or around your home you get it treated as soon as possible.

No one wants to see a repeat of the Bubonic plague.