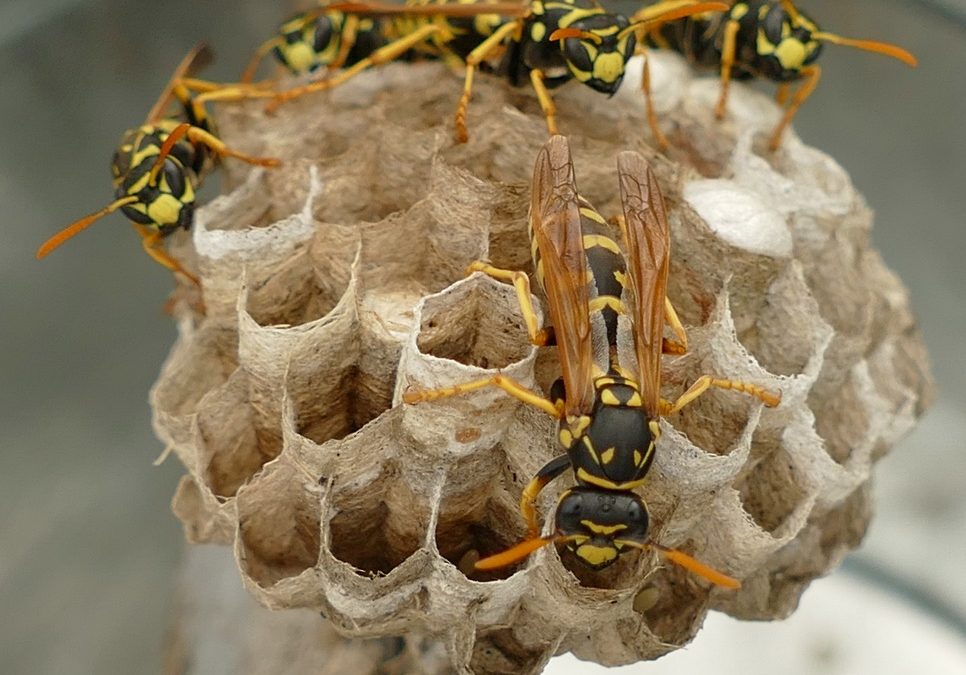 How and why wasp nests are constructed

How & why do Wasps build their nests?

From yellow jackets, to hornets to paper wasps they all are communal creatures who build nests to breed their young to make colonies.

In recent times we seem to have a better opinion of bees and wasps as we know how important they are to our ecosystem, although many of us find them to be obnoxious pests as they can ruin our planned outdoor activities.

Did you know bees and wasps are not only important to pollinate flowers and crops, but they also control crop pests and harmful insects.

Even though each species of wasp may differ in the size, structure, space the process is the same.

Question: What you think the common ingredient is in the construction of a wasp nest ?

The Queen wasp is the one who decides where the location of the hive will be. These can often be:

Wasps can build there nests anywhere they can provide a support to the nest.

Often their chosen location is in a concealed and quiet spot, so humans do not disturb or threaten them.

However, in saying this, wasp nests are sometimes built amidst human life which can become problematic.

Once the location of the hive has been decided, the worker wasps scrape off and chew wood particles from branches, fences, cardboard or anything that contains a wooden substance.

The worker wasps break down the wood fibres in their mouth and mix it with water and saliva which creates a soft sticky paper pulp.

The wasps return to the construction site and using their front legs and mandibles start pouring out the paper pulp onto the sites surface.

When the fibre dries, it transforms into a firm paper foundation from which the remaining nest will be extended.

Whilst the outside of the nest looks different the internal structure of wasp nests is the same. They contain lots of hexagonal cells which serve as rooms for the queen wasp to lay her eggs and breed her young.

As previously mention the main purpose of the wasp nest is to breed the young and build a colony the hexagonal cells require extra protection, so the wasps constantly add paper pulp in a hexagonal fashion to create the inner cells.

Once this phase is completed, the queen wasp adds further layers of paper enveloping the cells to protect her young and eggs from predators and the harsh weather elements.

Wasps live within their nest typically for one season, which is often from spring towards the end of summer or the beginning of autumn.

By Autumn the nest usually reaches its peak size as the colony continues to grow.

As winter approaches, the colony starts to die out due to the shortage of food.

The only wasp that survives is a fertilized queen by hibernating in old trees, basements or roof spaces.

When the entire colony has died and the weather has warmed up, the construction process beings all over again.

Wasps do not reuse old nests!

If you have an issue with wasps that you are concerned about call Sydneys Best Pest Control on 1300 760 045 or email us at info@pestcontrolsydney.com.au