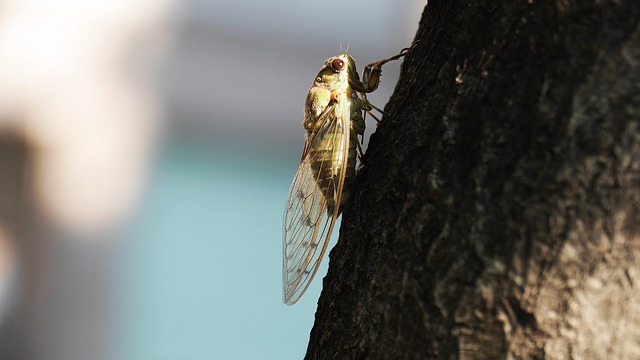 In the insect kingdom, cicadas are invertebrates that belong to the order Hemiptera, meaning that they are considered “true bugs.” Their superfamily, Cicadoidea consists of many subgroups that, while are generally very similar, have quite a few unique features. Compared to many other insects, cicadas have notably long lifespans which is often considered possible due to a long period of time spent underground as adolescents. This time allows the insects to grow and thrive in a predator avoidant situation, allowing them not only to experience longer life spans, but also a better survival rate for the species. They are well known for their loud, buzzing songs but, while this may be annoying, they are very harmless insects that don’t sting, bite, nor want to inhabit your home.

Cicadas are fairly large bugs with the ability to grow up to 2.25 inches in length. Their semi-transparent wings extend beyond the length of their bodies, folded in a tent-shape over their backs, and they have large, compound, bulging eyes. Most cicadas have bodies that are green, brown or black, and their eyes can be brown, black, dark grey, or even a striking red.

There are roughly 3,400 different subspecies of cicadas. Of these 3,000, there are two primary sub-groups: annual cicadas, and periodical cicadas. Annuals are seen every year, while periodical cicadas live underground for extensive periods of time, only emerging once in 10 to 20 years. The name “annual cicadas” is a bit of a misnomer, as these insects live on average between 2-3 years, emerging annually. Meanwhile, different “broods” (or groups) of periodical cicadas have different individual emergence cycles. These brood cycles sometimes overlap, meaning that cicadas can emerge every year, every few years, or only once in a decade depending on the broods in a given area.

Annual cicadas can be found in various areas throughout the world; however, periodical cicadas are distinctively found in the United States. These broods tend to inhabit both central and eastern United States and each brood can sometimes spread over surprising distances. While nymphs enjoy the safety of being underground, the adults far prefer to rest up in trees of on other types of foliage where they can seek out mates and feed on the greenery.

Depending on the particular subspecies, the life cycles of cicadas can vary drastically from 3 years to even 17 years long. The majority of their lives is actually spent underground as young nymphs, where they feed on the natural fluids contained within roots. When each species emerges, they go through a molting process, effectively transitioning into their adult stage of life. Once they have emerged sexually mature, the male cicadas begin emitting a very unique stridulation sound. This sound is used as a mating call, attracting the opposite gender for mating season, and is created through tensing and releasing a muscle within their abdomen. Surprisingly, this mating call can be so loud, it can even register over 100 decibels, which is louder than some trains. After mating, females lay their eggs using an appendage called an ovipositor. Ovipositors are saw-like limbs that are used to cut into the bark of trees. These openings they create are where their eggs are deposited and remain until they hatch, dropping to the ground to burrow into the soil and begin the cycle once again.