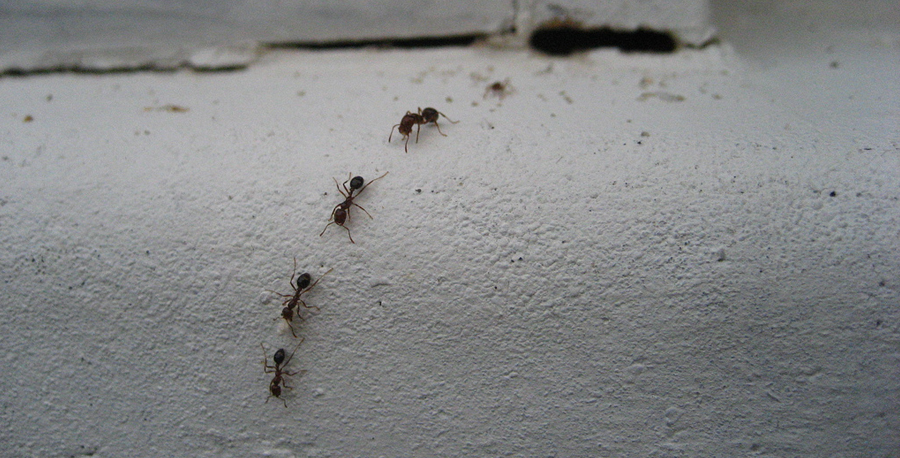 In Australia, there are about 3000 known ant species. Ants are a social insect that lives in permanent nests. Colonies vary in size and the majority of the time they are located in soil, wood and amongst rocks. Ants are common intruders both in and around the home, who can ever remember a picnic without ants? Ants are commonly observed around the foundations, in walls, roof voids, kitchens, bathrooms, laundries, lawns and gardens, decaying wood and rock formations. Ants are also seen to be one of the most successful social and interesting insects known to man.

Ants have 3 clear body segments, the head, the thorax and the abdomen. The first one or two segments are much smaller than the rest of the body, which almost makes the ants appear to have a waistline. The smaller abdominal segments have one or two projections called nodes, which may serve as identification features. The head carries compound eyes and the antennae, if wings are present they tend to be membranous and the forewings are usually longer and broader than the back hind wings.

Ants undergo a complete metamorphosis during their life-cycle. Eggs are small and oval in shape and the larvae hatch as a small whitish grub that thins off towards the head. The larvae are fed by the adults and after several feedings and moulting the larva pupates. This pupa is similar in shape to the adult ant but creamy in colour and softer than an adult ant. The life cycle from egg stage to adult form can take up to 6 weeks all depending on the species, the availability of food, temperature and season.

There are 3 castes of ants, the male, female and the worker.

Adult male ants have wings and their main function is to mate. The female usually has the largest body size and begins her life as a winged insect, as soon as mating occurs, the female loses her wings. In the majority of species the female only mates once and she will care for her young. Some species have only one reproductive female ant per colony, known as the queen, while other species may have many. It has been discovered that some female ants can live up to 15 years.  The worker ant caste consists of sterile wingless female ants, and the worker ants are the most numerous amongst the colony, serving the colony by increasing and building the nest, foraging for food, feeding immature ants, caring for eggs and defending the colony.

Ants live more or less in their nests, but due to adverse conditions may need to change the location of the nest. When a food source is located they leave behind a pheromone which clearly marks and alerts other ants that there is a food source available.

As mentioned earlier ants are regarded as nuisance pests in and around buildings. Small mounds of dirt which are a clear result from the building of their nests are often considered unsightly along garden paths, lawns, balconies and around the skirting boards. It is not unusual to see cracks appear in footpaths due to the ants excavating nests under the footpaths. Ants are known to trail themselves in and around buildings seen as unsightly by many. Ant species have been known to attack and damage certain plant life. Ants may also swarm causing distress to the home and business owner.

Ants may also present a health risk. Ants travel through unsanitary areas before they end up in your home; they are known to carry disease organisms which can cause dysentery, smallpox and even salmonella and as ants scavenge in kitchens, other food handling areas, garbage areas and even dog poo an ant issue in your home should not be taken lightly.  There are also other species of ants that can sting and bite, some of these stings can even be fatal!

For ants inside we place low toxic bait which they also take back to the nest, to kill the colony and Queen. If your ant problem is only inside the bait is sufficient.

With ants, we use a special product called Termidor; as ants are unaware Termidor is a poison they end up walking over it and taking back to the nest where they transfer it between each other therefore eradicating the whole nest.

FAQ’s ABOUT OUR TREATMENT

Termidor has been assessed by the Australian Pesticide and Veterinary Medicine Authority and Commonwealth Department of Health and Ageing and is fully approved for use in domestic situations. Termidor is water-based and virtually has no odour, will not leach through soil and is not damaging to soil micro-organisms, earthworms and plants. In addition, the active ingredient is used extensively on food crops around the world and as the leading product for flea and tick control on dogs and cats in Australia since 1996. Termidor has also been safely used in over 4 million homes throughout the USA and Europe.

HOW WILL YOU APPLY TERMIDOR TO MY HOME FOR ANTS?

Termidor is applied outside to the exterior foundation of your house, creating a treated area of protection.

HOW FAST WILL TERMIDOR WORK TO ELIMINATE ANTS?

The effects of Termidor should begin within one to three days and most ants will be controlled within the first week following the treatment.

WILL TERMIDOR HAVE OR LEAVE AN ODOUR

No, Termidor has virtually no odour.